James is founder/leader or co-leader respectively of Taiko West and Taiko Wales. He is musical director of the WEM Taiko Festival and Midlands Taiko Day, and leads Taiko West Schools and Community Project, one of the largest Taiko education projects in the UK.
[Read more]

James has been teaching Taiko full-time for over 20 years. On average, he teaches about 100 drumming workshops each year at schools and youth centres, community festivals and team building events.

He started playing in Japan in the mid-80s. There he became the first, and still the only, UK citizen to hold an official license from a traditional Japanese Taiko Preservation Society (Hiroshima 1986 – 1990).

James has several other UK only/firsts to his credit.
• The only Taiko teacher professionally-trained as a community music workshops leader
• 1993 founder of the first regular performance group – Akatsuki Daiko
• Co-founder, with Mark Alcock, of the first adults Taiko course in 1996

James performed with Joji Hirota between 1995-2001 and played sold-out shows in London with Taiko Meantime and with the Henry Oguike Dance Company on their 2005-2006 European tours. 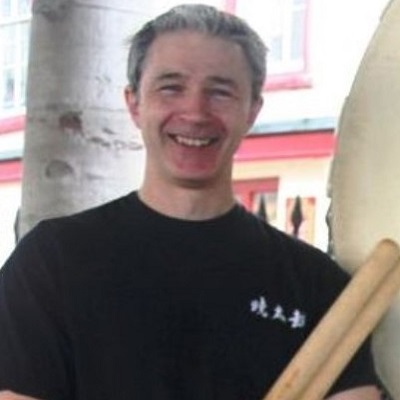