Liz Walters is a leading exponent of the Hokuriku-style taught by Mugenkyo’s teacher Masaaki Kurumaya Sensei. She founded Tamashii Daiko (an all-female group) nearly twenty years ago to perform this complex and demanding style. Her Tamashii School of Taiko primarily teaches the powerful playing and flowing movements characteristic of the Hokuriku-style.

Liz is one of the first players of Taiko in the UK, performing, teaching and coaching across Europe and Worldwide for over 20 years. She completed her apprenticeship with Mugenkyo in 1996 and later performed with renowned artists including Joji Hirota, Pete Lockett and Guo Yue.

In the early 2000’s, Liz helped set up and co-facilitate an annual International Taiko Course at the Fukui Dojo of Masaaki Kurumaya Sensei, with whom she appeared in several performances and Japanese TV documentaries. She helped to establish KyoShinDo, the very first Taiko group in Italy and more recently, Atene Daiko in Greece.

Liz continues as Artistic Director (and performer) of Tamashii Daiko. She teaches weekly classes in East London for anyone committed to learning Taiko, as well as facilitating schools and team building workshops across the country.

“Liz Walter’s Taiko workshops strike exactly the right balance between honouring the ancient Taiko traditions and having stonking good fun. She is a genuine but persistent teacher and her love of the culture suffuses her encouraging and empowering approach. You will emerge exhilarated, exhausted and inspired.”

“This is my first seminar with you and I feel like a blind who saw for the first time. What was most inspiring for me from the whole seminar was not so much the technical aspects and patterns that you taught us but your attitude towards the taiko, both when playing or not. Your presence and connection with the Taiko and with each one of us. Each of the little things you said had so much importance and is like a seed with so much potential to reveal.”

“Experiencing Liz Walter’s teaching in Taiko is a life-long gift for me.
She has a wonderful balance of all the traits that I consider inspiring in a teacher: she is accessible and has tremendous experience and knowledge yet remains humble and a keeps a spirit of always learning. Patient and an acute observer, she is tireless in class and understands group dynamics. She combines physicality with spirituality in the Taiko practice, with her example as well as with her words. There is an undeniable atmosphere of respect in the room throughout the workshop and students are valued regardless of their level and way of learning.” 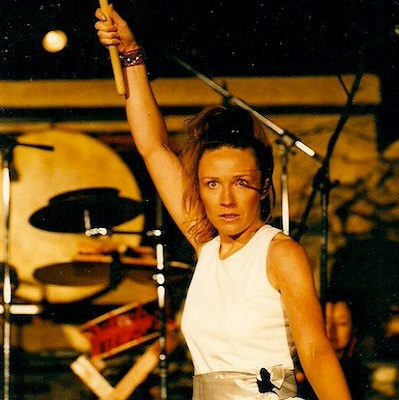