Markus Guhe has been performing with the Mugenkyo Taiko Drummers, Europe’s only professional touring taiko group, since 2011, doing multiple tours each year and countless performances abroad. He was awarded a Shakuhachi shihan (master’s license) in 2016 by the KSK (Kokusai Shakuhachi Kenshukan) and the prestigious, competitive KSK scholarship in 2017 to study with his teacher Kakizakai-sensei in Japan.

While Markus focusses on Honkyoku (the classical Shakuhachi repertoire developed by mendicant Zen monks during the Meiji era), he is equally passionate about other Shakuhachi genres and constantly looks for new ways to combine Shakuhachi and taiko.

In 2018 he released his first CD ‘Samazama’ featuring a mix of traditional Shakuhachi honkyoku and modern, self-composed music and created his first solo show at the Edinburgh Festival Fringe. markusguhe.net. 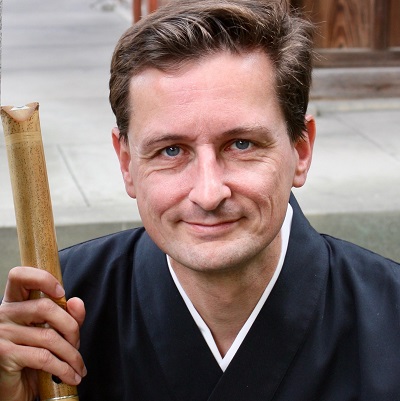